Large extension to bring new life to this beautiful old cottage on Clare Island, County Mayo. Planning permission has been won, and construction works have commenced.

Watch this web page for updated photos as construction progresses. 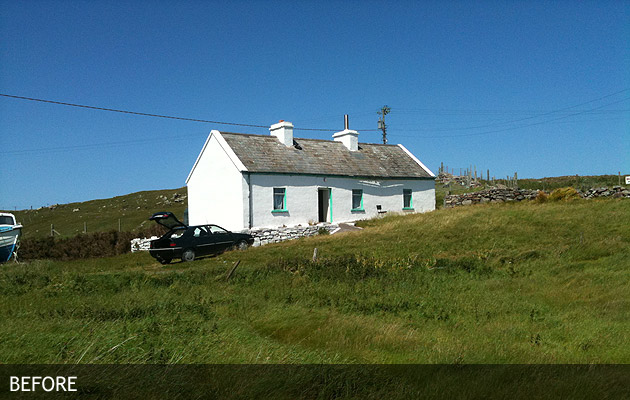 High quality insulation en-route on the ferry from Ronagh Pier near Weestport to Clare Island for construction, early August 2012 Front view of cottage and extension under construction early August 2012 Rear view of cottage and extension looking across the harbour, early August 2012 Front view of cottage and extension under construction mid-August 2012 Simple Photomontage of Proposal From Across the Harbour Early September 2012. Forming the sitting room window which frames the view southwards across the harbour. Front view of Cottage and Extension on 1st of October 2012.  Roofs on both main elements almost completed. Natural slates Cupa Heavy 3, and concrete barges poured and being struck on the original cottage. Similar barges are being prepared for the new block. 1st October 2012 –  Rear View looking across the harbour. View shows connecting flat roof section.  Images shows something of the beauty of Clare Island harbour.  With a keen eye you can pick out the castle of legendary Gráinne Mhaol – just above the chimney of the cottage! 1st November 2012. Sample image of the airtight membrane, part of a controlled environment which will see an internally warm insulated living space, while the old external walls are cool and ventilated and allowed to ‘breath’ as originally intended. 1st November 2012. Just an idea of how it feels leaving the island after the days work is done. Seas can be rough, and this day I was green at the gills, but completely love my work here. What a pleasure to work on Clare Island. 26th November 2012. Image of cottage and extension from across the beach on Clare Island. Very bright November day, beautiful light changing as the rain clouds seem to skirt around the island the entire day. 26th November 2012. When the plaster was stripped off the front of the cottage, beautiful stone walls are revealed. The decision is made today to not plaster the front cottage wall, but to clean it down and point up the stonework. 26th November 2012. Side view of cottage – most of the cottage is in Silhouette in this picture, but it does show the proximity of the work to the harbour and the beach. Unbelievable November day on the island. 26th November 2012. Clients on-site to inspect the works, standing in silhouette in front of the first floor sitting room window. This will be the t.v. of the house, south facing and overlooking the beach and harbour. Where else would you go? 26th November 2012. This was the cottage front door, now a picture window facing south and the harbour. 26th November 2012. A snapshot of the reality of architecture on the western islands. As we wrap up for the day, the excavator has to come with us, so is loaded onto the ferry from the beach. Excellent planning, scheduling and teamwork. 14th January 2013.  Front and side elevations, view as to be seen from across the harbour. Much work going on inside – electrical, plumbing, second fix carpentry, tiling and decorating. 14th January 2013. Front elevation as it reads from left to right, new two storey structure, the mid- glazed reception, and the restored cottage. All reading as the one home. Still lots to do … Your message was successfully sent. Thank You!